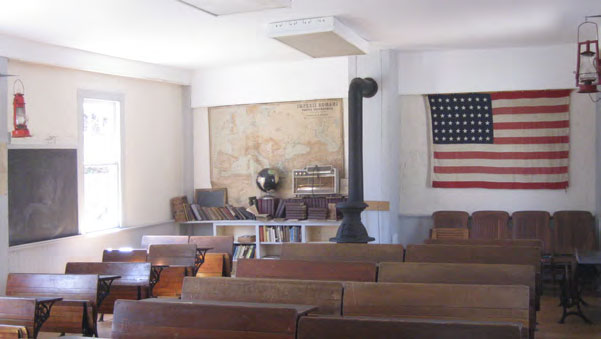 The New Milford Historical Society & Museum Collection includes the one-room Hill and Plains schoolhouse. It will be the subject of a complete restoration in the coming years. In the New Milford area are two other one-room schoolhouses at Gaylordville and Northville. While the Society only has the one in our collection, information about all three is available here.
Connecticut was one of the 13 American colonies of the Kingdom of England settled in the early 1600’s. In the western area of Connecticut a valley was known to its inhabitants, the Potatuck Indians, as Weantinock and in 1703 the area was purchased from them by a company of individuals chiefly from Milford, Connecticut. The first permanent settlers arrived here in 1707 and in 1712 New Milford was officially chartered by the General Assembly as a town. By 1721, there were twenty-five families in residence, and it was decided that a public school was necessary, to be open for six months each year. The town would bear half the cost, and the students’ families would pay the rest in taxes. The cost to these families could be paid in monies, labor, supplies, or firewood. The first school opened in 1729, twenty-two years after the first permanent settlers arrived here, and was available to children of seven to twelve years of age, and those younger or older could attend at additional cost. Due to scantily kept records, many details, including the location of the first schoolhouse, have never been determined. 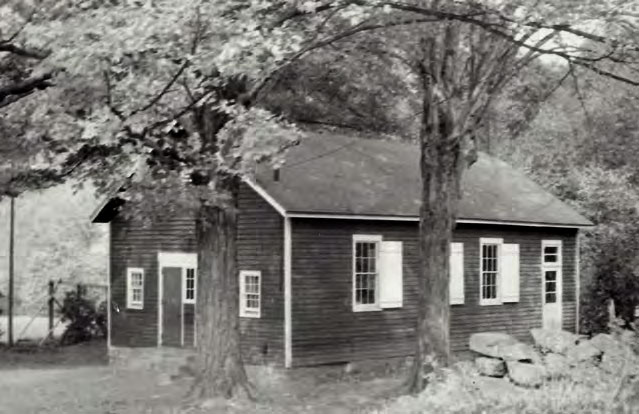 The school was run by one teacher, a schoolmaster or schoolmarm, who taught all of the grades, sometimes spanning pre-school to eighth grade. Often girls sat on one side of the room and boys sat on the other side of the room, with the youngest students near the teacher. The teacher’s desk was in the front of room with a blackboard behind the desk as in the Hill and Plain and Gayslord’s Schoolhouses. In the rear of the classroom was pot belly stove for heating and cooking. Samuel Orcutt’s “History of New Milford” states that one of the early schoolteachers was the celebrated Sarah Noble, daughter of John Noble. 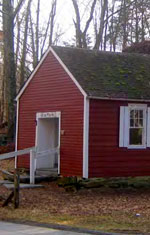 As additional colonies settled in outlying areas of the town, the area was divided again and again into school districts. It was not until after the American Revolution, in 1782, that the town voted to assign permanent names and numbers to each district. As town boundaries shifted and the population increased, moved around, and clustered in different areas, school districts were also divided, combined, re-named and re-numbered. Between seventeen and twenty-five districts were in existence at any one time. Before the public schools opened, in-home schooling provided children with grade school educations. Until close to the twentieth century, higher learning to prepare one for college or business schools was available only at private institutions, a number of which were located in New Milford. As the town grew, the school system established high school programs, and became more centralized, closing the schoolhouses one by one. Three one-room schoolhouse remain in the Town of New Milford. Two are on occasion open to the public as schoolhouses, Hill & Plain and Gaylord. The Northville district schoolhouse is presently under restoration.

Hill and Plain School District
According to Howard Peck's New Milford, "the one-room Hill and Plain schoolhouse which is off Sullivan Road west of Lanesville, in School District No. 3. Mrs. Ruth Sullivan donated this building to The New Historical Society in 1987." Often land for a school was provided by a local farmer and local families build the schoolhouse. The present school was built in 1843 and was in use until 1940 more… 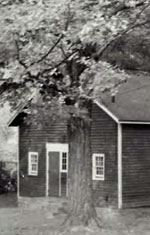 Northville
The land for the present schoolhouse in the Northville District was purchased in 1862. The schoolhouse served grades 1st grade through 8th; in later years to 6th grade. In 2002 Truman Richmond recalled that when he attended in the 1920's, the schoolroom surrounded by blackboards and students sat facing the teacher's desk on a raised platform in the front more… 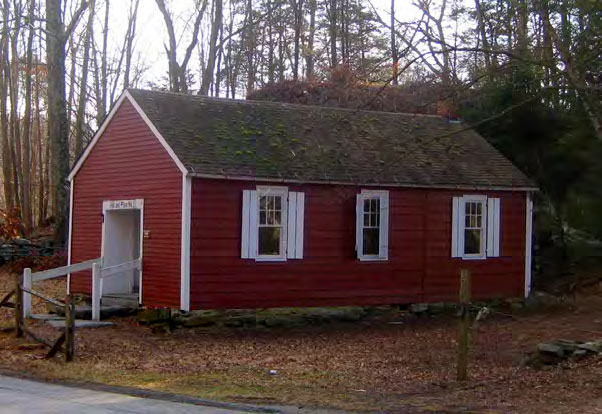 This schoolhouse was built in 1843 and was in use until 1940, when its students were sent to the Lanesville district one-room school, which remained in use for a few years longer. In 1995, Mr. Robin Stack, who attended Hill & Plain School from 1935 to 1940, stated there were only 16 students with four in the 8th grade. The room was heated by potbelly stove, burning wood supplied by nearby farmers in the spring and fall, and coal in the winter months. Each morning two students would go to the Wanzer Farm, just north of the school, and fetch a pail of drinking water. In later years, water was obtained from a spring on Carmen Hill. At recess the children would play ball in an open field across the road or would slide down the huge rock formation directly behind the school.

Dr. D. W. Knowles, of Lanesville, said in a 1911 New Milford Gazette article that his early education was in the “Pinchgut Plain” district school, which stood near the corner of present-day Danbury Road and Candlewood Lake South. The Hill district schoolhouse was very nearby on Sullivan Road and, due to population changes in the mid-1800’s, the two districts were consolidated into the Hill & Plain district. Dr. Knowles said that in those days little children three and four years old went to school, and when they were tired they were put in a warm corner to sleep, “as thick as pigs in a poke.”

Ruth M. Sullivan donated the Hill& Plain schoolhouse property to the New Milford Historical society in 1985. At the time of its closing in 1940, there were 16 students in the eight grades taught there. 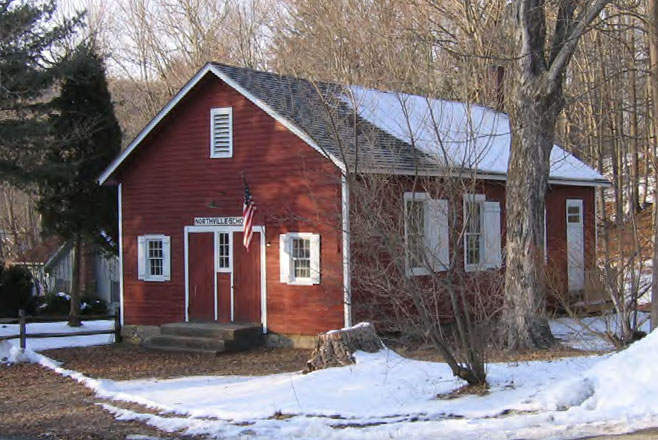 The land for this wooden structure was purchased in 1862. Originally it held classes for 1st through 8th grade, and in its later years contained grades one through six. It was shut down as part of the consolidation of New Milford schools, and after 1955 Northville students traveled to schools in the center of town.

In 2002, Mr. Truman Richmond recalled that when he attended in the 1920’s, the schoolroom was surrounded by blackboards and students sat facing the teacher’s desk which was located on a raised platform in the front of the room. The desks varied in size, with the smallest at the very front of the room near the teacher’s desk. A round woodstove in the front of the teacher’s desk heated the building. At the buildings’ entrance, the boys’ cloakroom was on the left and the girls’ on the right. For bathrooms, students were excused to use unheated outhouses behind the school. Older students usually performed daily chores, such as fetching water from a spring, chopping wood for the stove, and sweeping floors.

For many years the Northville Volunteer fire Company used the building for storage. The town owns the schoolhouse now and the Northville Schoolhouse Committee oversees its maintenance and use. 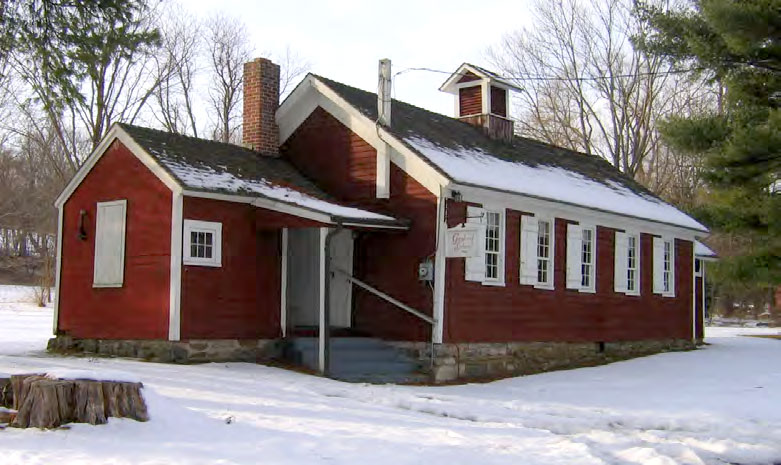 By 1740, the need for a school was felt by the colonists in northwestern New Milford, and so on their own they funded and built a one-room schoolhouse just south of Aaron Gaylord’s home. Ongoing expenses were divided among the families with children in the school. In 1860, the town formed the school districts and partially paid for expenses with collected tax monies. By 1858, the building was in poor condition, and the Gaylord School Committee decided to move it a short distance onto a new foundation and make the necessary repairs.

In 1872, the school was enlarged. In 1915, Miss Bessie Cornwell became the teacher following her father Charles Soule and remaining there until her retirement in1957, a total of 42 years. During her time, in 1952, electric lights were installed, an oil heater replaced the coal stove, and a small addition housed lavatories, doing away with the outside toilets.

In 1935, grades were limited to one through six, due to increased attendance caused by the closing of the Waller District School. As the populations grew, the higher grades were transferred to the centralized schools of New Milford. By 1967, only grades one and two were taught in the schoolhouse, and it closed its doors for the last time that June. In 1968, a group of Gaylordsville residents worked to preserve the schoolhouse as an historic site.
In 1975, the Gaylordsville Historical Society was formed and now maintains the building as a museum containing items of historic interest. The structure has been known as “The Little Red Schoolhouse” for many years. Contact the Gaylordsville Historical Society for information and hours. 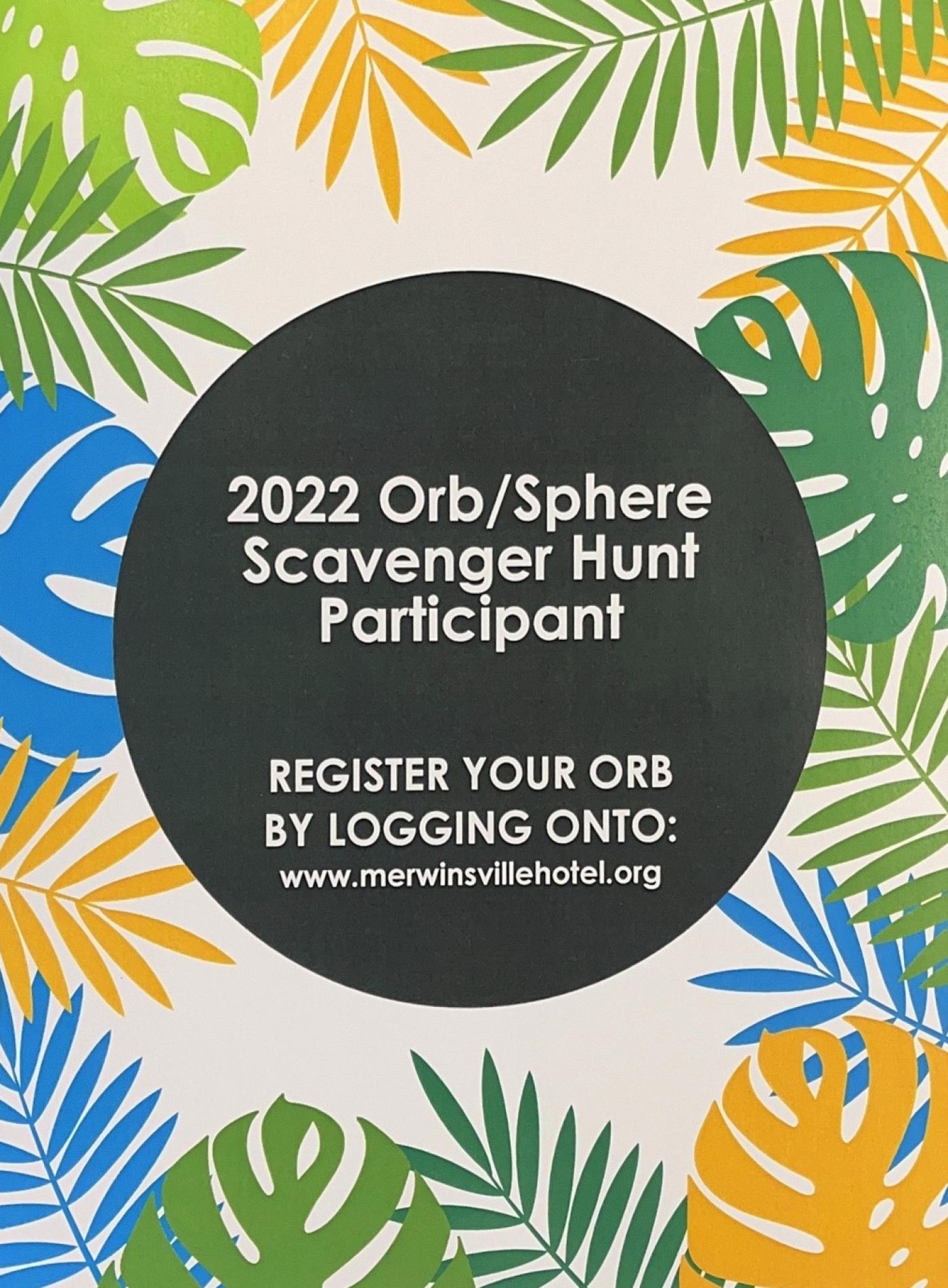